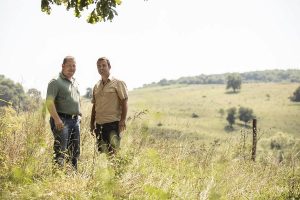 Two Swiss investors started an Angus cattle farm in Romania in 2008 and have turned it into one of the biggest local companies in this sector. In an interview with Romania-Insider.com, they share their story and their solutions for developing this sector in Romania.

Samuel Widmer and Stefan Jung first came to Romania in 2008 determined to build an Angus beef farm in a place suggested by one of their meat suppliers: Marpod near Sibiu. Among their main objectives is the construction of a network of producers throughout the country, covering all stages of production: grazing, raising, and fattening animals, but also slaughtering and meat processing.

“In the beginning, I didn’t know anything about the country, not even its exact location,” Samuel Widmer told Romania-Insider.com. However, that didn’t stop him and his partner Stefan Jung from buying an abandoned farm in Nocrich, in Sibiu county, for EUR 100,000. The next step was to import 120 Angus cows.

Today, they run one of the biggest cattle farming and meat processing businesses in Romania, with a turnover of over EUR 11 mln in 2019 and about 120 employees.

About half of the meat they produce from cows grazed in the green Transylvanian meadows reaches consumers in Germany, Switzerland, Bulgaria, Greece, Spain, and Italy. At the same time, they are making efforts to develop a local market for their products.

Challenge Accepted Hackathon concentrates on digitization of public institutions in 2021